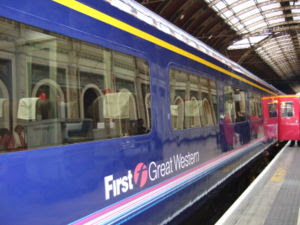 It was warm and sunny in Devon. Honestly. You would never believe how the weather could change so suddenly causing terrible floods. I spent a few days relaxing with my family and sleeping a lot. I hadn't realised how tired I was until I actually got away.

The journey down on a First Great Western train should have been fine, but halfway there it was announced that the train was to be diverted via Bath and Bristol, due to a vehicle having hit a railway bridge, thus preventing trains using the normal route. This was to add 45 minutes to the journey. Bath and Bristol having been passed through, the train slowed almost to a halt and crawled along for miles in the Bridgewater area. This, apparently, was due to reports of people walking alongside the line. We finally arrived in Exeter about 75 minutes late, my parents having been waiting for me at the station for all that time. I was just glad that son 1 had decided not to travel with me, as he would have been very stressed out.

When it was time to travel home yesterday, I was relieved to see the train arrive dead on time at Exeter. I was disappointed to find my carriage noisy and dirty, crowded with teenagers returning from surfing holidays in North Cornwall. But that was just the start. About half an hour into the journey an announcement came over the tannoy that the train was to be diverted to Bristol, where it would terminate, due to flooding on the lines in the Newbury and Didcot areas. The train manager didn't know how anyone would be able to travel on to London.

At Bristol we all piled out with our luggage and sought information. There was already another London-bound train stranded there and nobody seemed to know what was happening. Eventually a rumour went around that there was one train due to go to London via a southern route, but it would take about four hours. It was a small train and by the time I got there all the seats were taken and people were fighting to get on. I managed to secure myself a standing space in the region of the door, with a piece of wall to lean against and my luggage at my feet. It was like the London Underground in rush hour as we all crammed in together and in typical British fashion we even managed to have a bit of a laugh about it, despite some fraying tempers.

It was a long way to London. I was glad that I had a bottle of water, some painkillers and a flapjack with me. By the time we reached London Waterloo station over four hours later, having taken the long scenic route through via Salisbury and Basingstoke, I was exhausted and feeling quite wobbly. I still had to cross London on the Underground and even that had delays due to the floods. I finally got home at about 8.30pm instead of about 4.30pm, just glad that I had been able to get back to London at all in the flood crisis.

I have travelled between London, Reading and Exeter many, many times over the last thirty years and these were by far the worst journeys I have ever had. To be fair the problems were the fault of freak occurrences rather than the train companies, though the level of communication provided to travellers, especially at Bristol Temple Mead station, was very bad.

More about my very short holiday next time, when three notable things will return!
Posted by Cathy at 6:01 PM

So sorry to hear about your appalling journey - what a nightmare! But looking forward to hearing more about the hols.