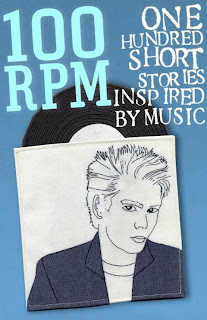 I have a tiny flash fiction in this book, published today. 100 RPM is a collection of stories inspired by music found on YouTube, each story being 100 words or less.

The anthology, to benefit the charity One in Four, was edited by Caroline Smailes, who explains here how she went about publishing it as a Kindle ebook. I'm proud to be included with so many brilliant writers and look forward to discovering the work of those I don't yet know.

My own story, number 48, is called Barricades. It might not surprise you to learn that it was inspired by a famous Spandau Ballet song.

100 RPM is currently very cheap on Amazon and all profits will go to help survivors of sexual abuse. What's not to like?
Posted by Cathy at 7:14 PM 2 comments:

The last few months have been full of nostalgia.

There have been numerous television programmes about the 1970's, the decade in which I was a teenager. I'm currently watching 56 Up, the latest instalment of a series which which has followed a group of people from the age of seven. Although the participants are a few years older than me, the film clips are so very familiar, making me wonder if I ever looked and sounded like that too. The answer is, I think, yes. I can't help comparing how different we were back in the 70s to teens of today.

Then there has been the demise this year of three mighty pop legends of the 70s and early 80s, which has led me to rediscover their music on YouTube.

Death of a disco queen

It's always sad when you hear of the passing of a music legend, whose songs formed part of the soundtrack of your life as you were growing up. Today is no exception, with the news that Donna Summer has died of cancer. Perhaps her most famous song was Love To Love You Baby, but I've always loved this Jimmy Webb classic, so what better way to remember Donna?
Posted by Cathy at 5:47 PM 2 comments: