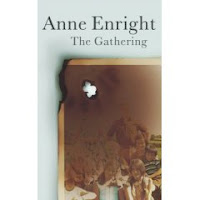 So, they were all wrong. In the end Anne Enright won the Man Booker prize for The Gathering, which is, I understand, quite a dark and disturbing read.

Two days later, she is already embroiled in controversy over a piece published in the London Review of Books. It is about the McCann family, whose daughter Madeleine disappeared in Portugal in May.

Having just read the piece I feel uncomfortable. She is only expressing her opinions, but I think most of us have some sort of view on what happened that night. Surely though it is better to keep those thoughts to yourself rather than make them so pointed and public?

1. I'm almost up and running on the OU Start Writing Plays course...

2. Went into town with son 1 this morning so he could spend some of his birthday money.

3.Very soon we are going to have some new neighbours across the road. Hope they will be nice.
Posted by Cathy at 3:28 PM

Yes i would agree with you.

Yes, you're right. It makes me feel hugely uncomfortable - but then again the whole thing has and for a long time.

That article was interesting and I agree uncomfortable, saying things that perhaps should not be said but I can see why she wrote it. She seems to be analysising the public's and media's reactions to the McCanns and she's using herself as an example of the 'public', what we all (she assumes) are thinking. I haven't read her book (although I think I probably will), it's meant to be quite dark isn't it, just like that article was, so I guess it's her way of writing things. She seems to be obsessed with words and their usage, maybe that's what you have to be to win the Booker Prize. But back to the debate about whether she should have written it, don't know.

Good luck with the neighbors.

I will have to read this book.

Lacer, yes I agree it was a very analytical article, it made me wonder if she has studied linguistics and/or psychology. But I do think that some parts of it, at least, would have been better unsaid.

She seems highly intelligent and as in the case of Martin Amis, who has had similar problems recently, intellectual honesty comes above all. Uncomfortable, certainly, but I don't think wrong or cruel. Tricky though.