Of coffee and exam results 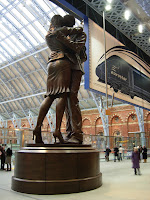 An exciting week has just flown past.

On Monday I met lovely Miriam for a coffee. Miriam and I discovered each other in the writerly blogosphere during the last year and I was delighted when she emailed recently to say she would be passing through London whilst over here on a holiday from Israel. I was particularly thrilled because Miriam often blogs about the social anxiety from which she suffers, so I knew that for her making the suggestion to meet up was a Big Thing.

We met at the impressive new St Pancras International station. Not the most exciting location perhaps, but convenient for both of us. And Miriam needn't have worried, as I was in one of my most chatty moods as we sat in the Costa Coffee situated in the row of smart little shops. I probably bored her to death, but I hope we will be able to meet again in the future.

On Tuesday GCSE results came out. Son 1 had taken just one exam, but his preferred college placement and course for this year was dependent upon a grade of at least C and he wasn't sure he'd done it (he already had the required result in his BETEC First Diploma). He was working on Tuesday and couldn't get to college to receive his result in person, so we had to wait anxiously for the postman on Wednesday. The news was good and yesterday he enrolled at his first choice college for a BETEC National Extended Diploma in IT, which is the equivalent of taking three A levels. He has chosen not to go back to our local college, even though academically he did well there last year, and will be facing a daily commute, albeit against the rush hour mayhem. He'll just have to learn to get up earlier.

(The picture is of the statue at St Pancras which, stupidly, I forgot to go upstairs to look at. Next time...)
Posted by Cathy at 7:14 AM

The getting up earlier will be the making of him! Glad you had a good week and was able to meet your friend. I've made some lovely friends through the blogosphere too.

Cathy, you didn't bore me at all - far from it. Thank you for making it so easy. I'm looking forward to our next meeting. Congratulations and good luck to Son 1.