The Midwife's Confession - a review 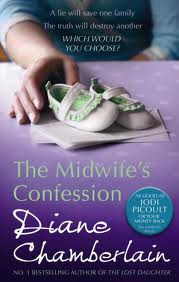 I have to admit that until last Christmas, Diane Chamberlain had passed beneath my radar. This is somewhat surprising, since I like to write issue-led fiction myself and Chamberlain has been likened to Jodi Picoult, an author I have enjoyed reading for several years.

But then I spotted Diane Chamberlain’s novel The Lost Daughter in a Kindle promotion and I was hooked. So I was delighted when I was offered the opportunity to review the latest novel, The Midwife’s Confession for her current blog tour.

Noelle, Tara and Emerson had been best friends since their college days nearly two decades before. Noelle had followed her dream of becoming a midwife and delivered both Tara and Emerson’s daughters. But after Noelle’s shock suicide the women find a letter hidden in her belongings that turns their world upside down. They begin to realise that the passionate woman who had loved her job as a midwife and who seemed to embrace life, had lived with a legacy of guilt that had consumed her and that would ultimately change everything they had come to know about themselves.

The Midwife’s Confession is a rollercoaster read, seen from multiple viewpoints. Short chapters tell the story in the first person voices of Tara, Emerson and Tara’s teenage daughter Grace. They are interspersed with chapters disclosing the hidden parts of the story, told in the third person from Noelle’s point of view. As Tara and Emerson search for the truth about their old friend, secrets and lies are revealed in layers, like an onion being peeled back. At one point I thought I’d guessed the answer, but no, there were many more twists to come. The sheer pace of the narrative keeps the reader totally engrossed through 400 pages, though I did occasionally get confused by the number of minor characters. This may have been because I was reading so fast, eager to discover Noelle’s secrets.

Diane Chamberlain’s prose is smooth and very readable, and I’m looking forward to discovering more of her work. Her background as a psychotherapist shines through in bringing to life the complex psychological depths of female relationships, both between friends and mothers and daughters. I was truly left wondering how I would have reacted if Noelle had been my friend.

Diane Chamberlain, has been described as the ‘Southern Jodi Picoult’ and is the award-winning author of 19 novels. Her emotionally complex, powerful stories are born from a former career as a psychotherapist working primarily in hospitals with adolescents. With a keen desire to understand people, and themes that often explore the havoc wreaked on friendships and family by past actions, her characters are brought to life by moral dilemmas that challenge the reader’s assumptions.

Fully aware of life’s twists of fate herself, Diane was recently diagnosed with rheumatoid arthritis and now has to type using voice recognition software. Diane’s UK debut, The Lost Daughter, was one of the bestselling fiction titles of 2009.
Posted by Cathy at 10:06 PM

That's a really good review, Cathy. Always good to read something written by someone who knows a little about what they're writing. I think it makes for a smoother manuscript. Thanks for the recommendation.

Hope you enjoy it, CJ xx