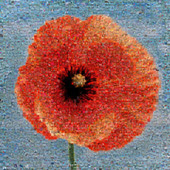 Today is the day for wearing a poppy and remembering those who have lost their lives fighting for our country.

My paternal grandfather fought in World War One. He must have been quite young but I believe he met my grandmother through a pen pal scheme for soldiers. They finally married and had children relatively late in life. I never knew that grandfather, he died when my father was still a teenager.

My maternal grandfather was of the age group which could have been enlisted into the Second World War. As a bank manager, however, he was exempt from being called up, though he did work for the Home Guard in true Dad's Army fashion. I think he may have been an air raid warden. He later experienced some mental health problems during his life.

My parents have never talked much about the experiences which they, as children, had during the war or of how it affected their parents. I know that my father and his brother watched the Blitz over Exeter and that his family hosted young evacuees from London. Of my mother's experiences in the Midlands I know relatively little, though she is younger and perhaps remembers less. Or was it all just too traumatic for them to process and pass down? Are those memories perhaps still compartmentalised and locked away?

We, and our children, have of course known this country to be at war, but never anywhere near home territory. Even seeing the horrors that we do on television cannot begin to compare with what my parents might have seen and experienced and they were lucky enough not to lose a close relative. Those families who have lost loved ones, in any conflict, deserve our respect and remembrance as, of course, do all the survivors.

We must never forget.

1. I'm quite pleased with my response piece on Your Messages today.

3. I've just manged to complete a brief piece for an OU tutorial...last minute stuff but at least I did it!
Posted by Cathy at 6:32 PM

I agree with Angie - fantastic. This kind of personal/social history is beyond value.

No we dont have a clue do we.
Lovely post.

I think unless you were there it is impossible to imagine the true horror or war. However, we will never forget what is told to us.

Thank you, all.
Crystal, I just wish my parents had told me more... perhaps they will yet. The grandparents are sadly no longer with us so their testimony is lost. But you don't think to ask when you are young, do you?

My grandad served in the war and it made me cry listening to some of his stories.

One of the most poignant was where he had just caught up with his brother's regiment only to find out that his brother had been killed.

Can you imagine that?