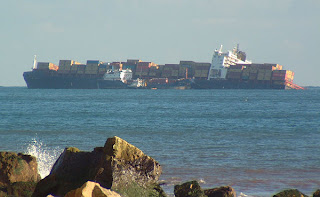 I don't think my parents could quite believe my fascination with the wrecked MSC Napoli. To the locals in East Devon it is a nuisance, a source of beach pollution and a hindrance to the vital tourist trade. It has to go, yet earlier attempts to refloat it had been unsuccessful due to damage sustained during the storm which resulted in it being beached. It has languished distantly on the horizon surrounded by tugs and other vessels belonging to the salvage company, whilst on the beaches locals and opportunists fought to salvage the contents of containers which washed ashore. The whole saga made the national news media which is unusual for the often sleepy and insular South West.

On the day I arrived in Devon the Napoli was to be blown into two parts which could be towed away separately for safety. That evening we piled into the car and drove up to a vantage point on the cliffs to observe the results of the operation. The ship was resolutely still in one piece.

The next day I, along with many others, watched it from the promenade and tried to take photos...sadly it was really too distant for the zoom lens on my old camera ( the above is from Wikipedia!) That afternoon more depth charges were used. Still the Napoli remained intact. It must have been better built than anyone had anticipated. About an hour after I left town two days later, a third attempt was successful. See the Napoli being dismantled here. I missed it all.

I think my interest arose from the fact that, back in the 1980's, I used to lead a team auditing a shipbroker. My client introduced me to the world of merchant shipping and took me to visit the old Baltic Exchange, where brokers still matched ships with cargo loads by bartering on an exchange floor. A piece of history which has disappeared since the Baltic Exchange was blown up by an IRA bomb and city trading became electronic. It is such a shame that the historic building was not restored.

1. Visiting a friend I don't see often enough and catching up with lots of gossip.

3. Making the most of the fact that Son 2's school holiday starts a whole week later than most other children's!
Posted by Cathy at 5:52 PM

Hello Cathy
Interesting stuff.
Saw lots re the Napoli on TV but always thrilling to see stuff 1st hand.
And tell me about Harry P... Someone said today there MAY be another book after all.
Do you think ther's any truth in this?

Now, Jan. that is asking me to give away the ending and I haven't even read it yet! But I have heard a rumour to that end too...

For me the fascination is that it's a scene from a bygone age, a ship aground on rocks, locals erm beachcombing the wreckage on the beach. An old west country tradition that radar and satellites haven't managed to banish completely